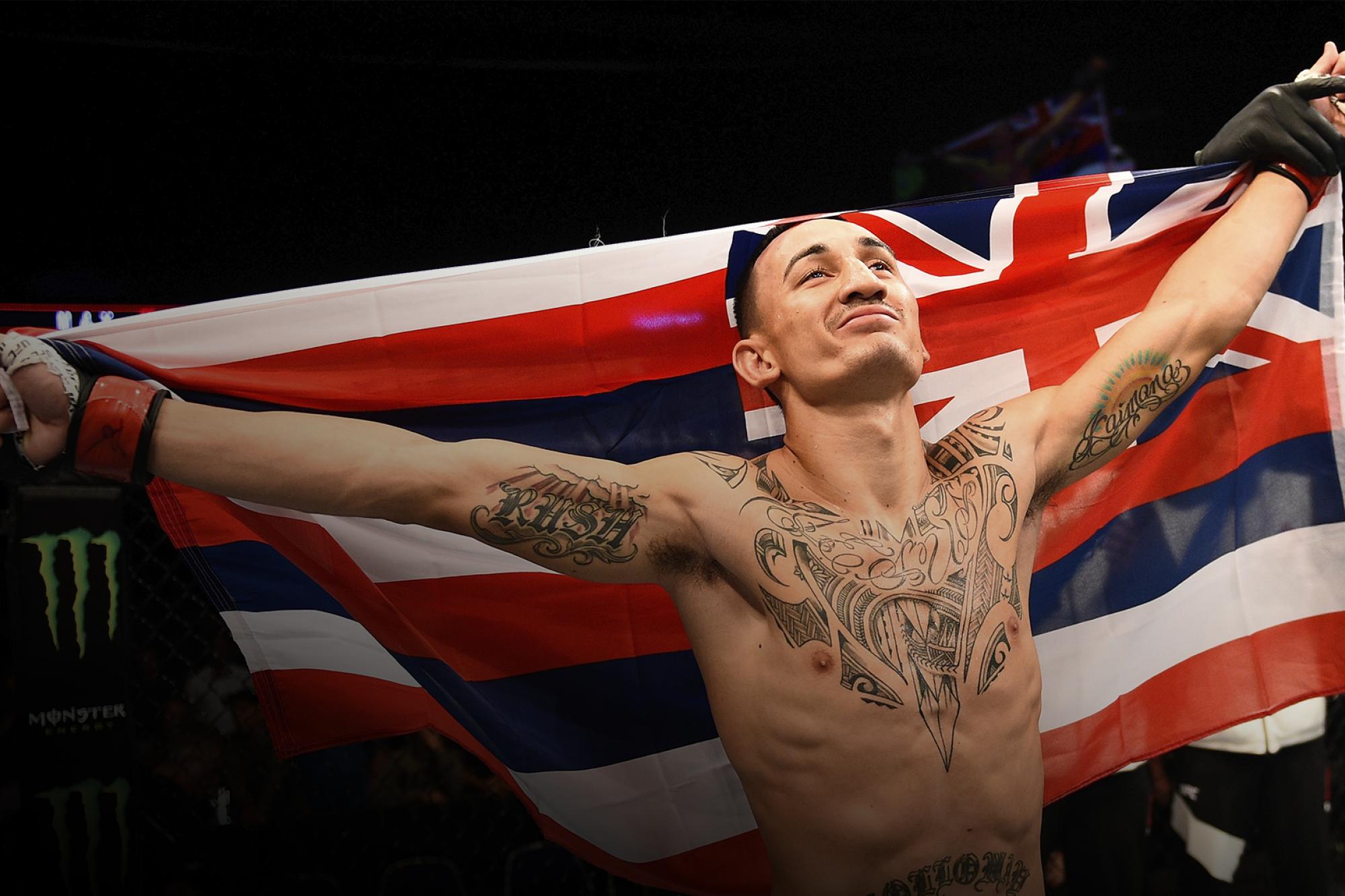 Get ready for UFC Fight Night: Holloway vs Kattar by watching Holloway’s milestone victories in Saskatoon, Edmonton and Toronto.
By Gavin Porter, On Twitter @PorterUFCNews • Ene. 13, 2021

While he may not be Canadian, it sure feels like Max Holloway has been adopted with open arms by Canadian MMA fans. The “Blessed Express” has experienced some incredible moments in the Great White North, where he has headlined four events.

As the UFC prepares for its first event of 2021, the self-proclaimed “honorary Canadian” is slated to be back in action against Calvin Kattar.

Get ready for UFC Fight Night: Holloway vs Kattar by watching Holloway’s milestone victories in Saskatoon, Edmonton and Toronto. 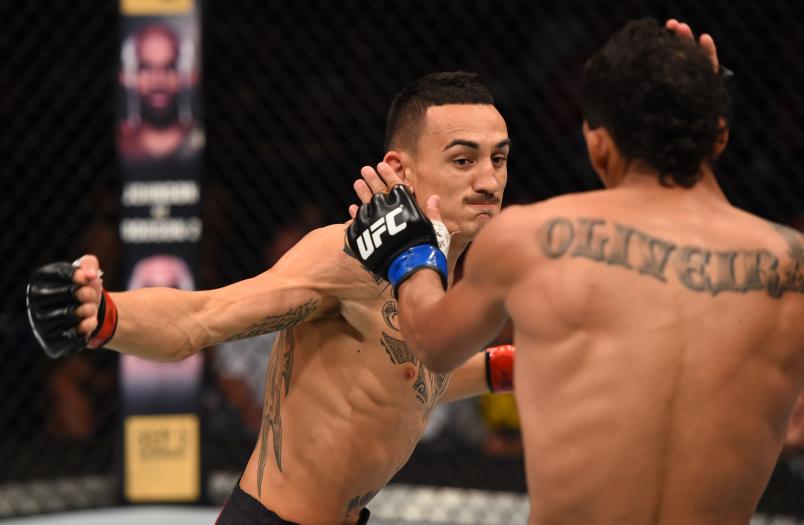 Max Holloway of the United States punches Charles Oliveira of Brazil in their featherweight bout during the UFC event at the SaskTel Centre on August 23, 2015 in Saskatoon, Saskatchewan, Canada. (Photo by Jeff Bottari/Zuffa LLC/Zuffa LLC)

Coming fresh off an incredible submission win over Cub Swanson, the UFC awarded the surging Holloway his first main event slot opposite Charles Oliveira. The two featherweight contenders were both riding win-streaks (six in a row for Holloway and four in a row for Oliveira) heading into their Saskatoon showdown.

The stakes were high, as the winner would likely put themselves closer to a shot at the winner of the bout between Jose Aldo and Conor McGregor.

Unfortunately, Oliveira would suffer an injury just over a minute into their highly anticipated fight. Something happened to “Do Bronx” when he shot in for a takedown near the Octagon fence and after standing up for a brief moment, he slowly fell to the canvas, clutching his neck and collarbone. The injury would be the end of the fight.

In his Octagon interview, Holloway was quick to ask the crowd in Saskatoon to pray for his opponent, showing his trademark sportsmanship. 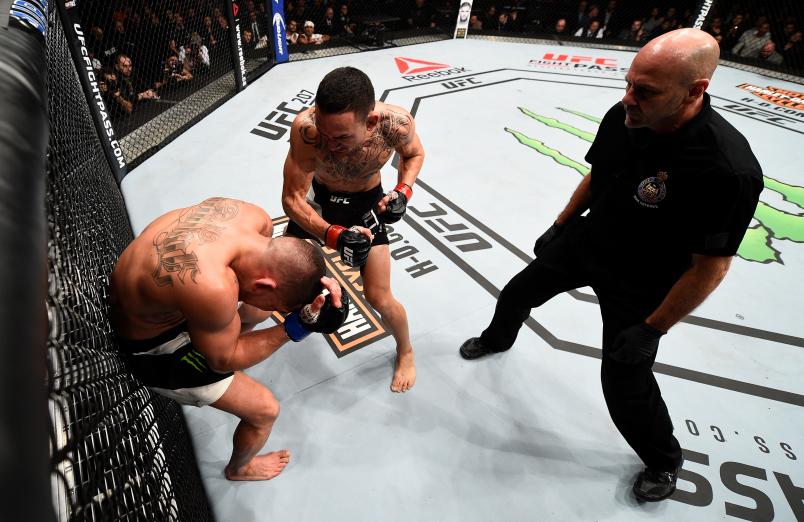 Max Holloway continued his Octagon success in the fights that followed that victory in Saskatoon, extending his win-streak to nine, while earning him a shot at the interim featherweight title at UFC 206 in Toronto.

Holloway’s first shot at UFC glory would come against former UFC lightweight champion Anthony “Showtime” Pettis. It was a huge moment for Holloway and a real opportunity to show that at only 25 years old he was ready to lock down the featherweight throne.

Pettis missed weight for the bout, so Holloway was the only one who could leave the Air Canada Centre with the interim title. And “Blessed” would go on to do just that.

Holloway and Pettis exchanged strikes in a competitive first round, with Holloway finding success with his counter strikes and Pettis using his trademark kicks to attack the Hawaiian. Holloway became the aggressor right away in the second, connecting with a big right cross that sat Pettis down. The chess match continued, as Pettis pushed forward despite the effective strikes of Holloway.

Both fighters were having success throughout the third round until Holloway was able to break through thanks a huge final minute. Holloway tripped Pettis, landed a beautiful spinning back kick to the body, put some big body shots together and then put together a massive flurry that Pettis couldn’t handle.

And that was all she wrote. Max Holloway was officially the interim featherweight champion. 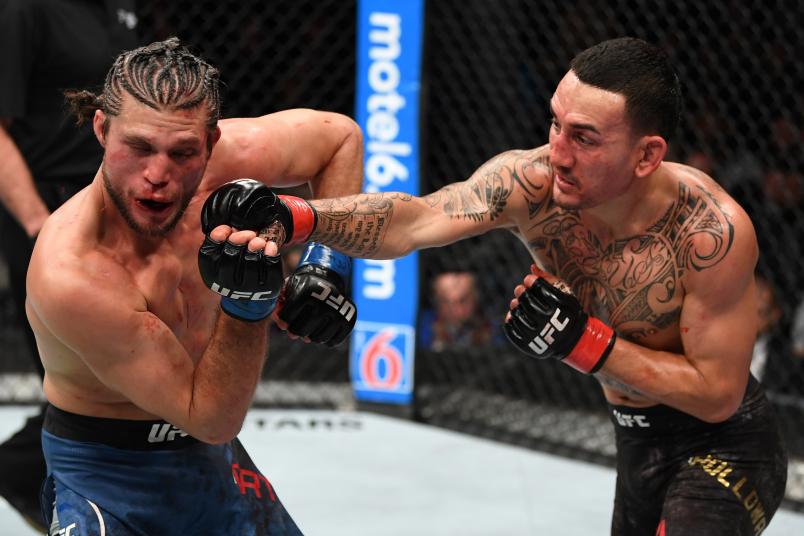 Two years and two title tilts with featherweight legend Jose Aldo later, Max Holloway was the undisputed champion and ready to begin his reign with Aldo removed from the picture.

As the rounds went on, it became clear that no matter how many times Holloway hit Ortega, the California native would never fall. Holloway was outclassing Ortega with his jab and straight punches for the entire bout, causing massive swelling on the face of Ortega. By the end of the fourth round a bruised and battered Ortega sat on his stool and the doctors had seen enough.

Max Holloway had defeated Brian Ortega. The best was “Blessed,” and he showed off why yet again. 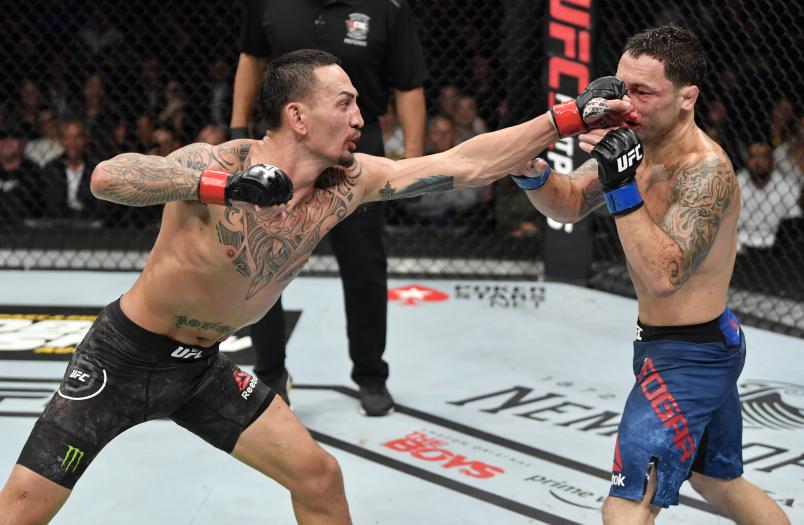 Max Holloway’s next featherweight title defense would come against the legendary Frankie Edgar in Edmonton. A win over Edgar would add another big name to the list of foes that were bested by the pride of Hawaii.

Holloway would go on to add to his legacy, outstriking Edgar over the course of their five-round main event. It was truly vintage Holloway. Flawless movement, counter strikes, a vicious jab and an endless gas tank. He was able to make it look easy against Edgar as he added to his legacy as one of the best 145-pounders to ever strap on the gloves.

Make sure to subscribe to UFC Fight Pass to watch all of Max Holloway’s fights, including his upcoming UFC Fight Night: Holloway vs Kattar main event bout this weekend.

In addition, on Wednesday Jan 20th, UFC Fight Night: Chiesa vs Magny will be exclusively broadcast for Canadian residents on UFC Fight Pass.

Tickets How to watch

Tickets How to watch